Does your Putter need to go on a Diet?

I recently recorded a podcast with Tony Wright of Game Improvement Golf. I strongly urge you to learn more about Tony at his website https://gameimprovementgolf.com/. It is an amazing resource and I think he mentioned I am podcast #149. I am honored every time he asks me to participate as it is an impressive list of interviews.
https://gameimprovementgolf.com/149-putter-weighting-101-bruce-rearick-interview/
Our topic for this session was the influence of putter weight on the stroke. Tough subject to cover in 45 minutes, and I have been kicking myself on missing some points I consider important.

Let me say from the start that I am in firmly in the stable that believes too heavy is more detrimental to your stroke than too light. Controlling the speed and direction a golf ball travels is all about that first word, control. Unfortunately, when it comes to putters there is a tendency to choose what we prefer over what we need. Considering the weight you prefer, it helps to remember the heavier the putter the more we cede control of the stroke to the putter. Eventually the putter swings you rather than you swinging the putter. That heavier weight can give you a false sense of control. Your stroke feels slower and smoother, but your results don’t match your feel.

To control how far the ball rolls, you must consider many things, most important is speed of the putter at impact and the launch conditions of the ball leaving the putter. These are the main contributors to how fast the ball is moving when it starts true roll. True roll is the point when gravity and friction overcome the initial ball velocity and the ball no longer skids. Usually between 5 and 20 percent of the distance the ball travels. Speed at true roll is the most important parameter in determining distance. Right away some are going to say I skipped where I strike the ball on the face as a factor.  I think this is secondary as I can overcome a poor hit with more speed. Tour guys do it all the time. Doesn’t feel the same, but that is a story for another day.

I recently started using a new technology for me, produced by CaptoGolf from Italy. It has given me a new perspective on the data I have collected over the years. As I measure putts, I can clearly see the influence of putter weight in what we call the transition areas. A putter changes direction several times in a putting stroke. It has to start away from the ball, it has to move vertically as it follows the arc defined by the stroke, it has to stop at the end of the back swing then turn and start back toward the ball. All with the hopes that it is moving at the proper speed, with the proper launch conditions in two planes, vertical launch and horizontal direction. When the putter is too heavy, controlling the putter at all these points becomes difficult. Basically, once it gets started it becomes difficult to get it to stop. Especially on short putts that require a shorter stroke.

The following is a screen shot from a measurement using Capto. The player uses an extremely heavy putter. It weighs in excess of 650 grams, total weight. The picture shows the position of the putter-face relative to the path the putter moves. The green line represents the path and the aqua line represents the position of the face relative to the green line. Below the green line is closed to the path and above the green line is open. The putter is opening as the line moves up and closing as it moves down. The yellow vertical line represents the end of the back swing and start of the forward swing. Even if you have never seen this representation before you notice the blue line is moving all over the place. There is a lot to talk about in this stroke, but for today I would ask you to focus on the transition of backswing to forward swing at the yellow vertical line. Basically, you are looking at a total loss of control in the transition. 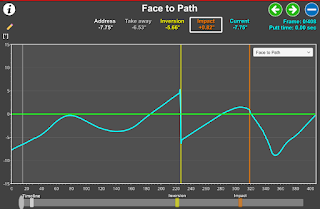 Our goal is to have more stability along the path. More like this…. 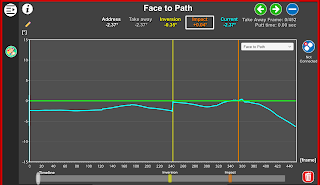 I know there are some instructors out there who would try to fix this problem with by working with the player mechanics and there is no reason not to go down that path. But in this case, her coach and I are convinced this is a function of reaction to putter weight. Time will tell and unfortunately, we are in a delay and won’t be able to measure the results of a lighter putter with the same specifications. But for the time being I will take her word for it that it is easier. More to come. Stay Safe out there and if you have time listen to the podcast.

Hi Bruce. This is Tony. First can't wait to get the podcast live to your audience tomorrow. You covered a lot of ground, and if you missed some things you wish you talked about - well that was maybe because there are a lot of things to talk about in the area of Putter Weighting.

Second - wish I had thought about making the title of our interview Your Putting Diet! - pretty good.