The United States Golf Academy was recently named by Golf Digest Magazine as one of the Top 100 club-fitters in the United States. If there is a reason we were chosen for this honor I think it is simply this. We have assembled a group of excellent golf instructors who understand that you can’t have a conversation about how to swing a golf club without knowing something about the playing characteristics of the club. Nowhere is that more evident than with the wedges you play and yet they are often overlooked during the fitting process.

When buying new clubs, the wedges should be fit in a separate process. The reasons to do so are basic. First, we use the wedges for shots covering a broad range of distances. Where the variance might be +/- 7 or 8 yards with an iron, it could be as much as 25 yards with a wedge. Second, we make a variety of different swings to achieve the distance controls we seek. Outside - in cut shots, inside - out paths for low spinning shots to the green, steep or shallow angles of attack depending on lie and shot requirements. Our ability to hit these shots requires perfect clubface control. 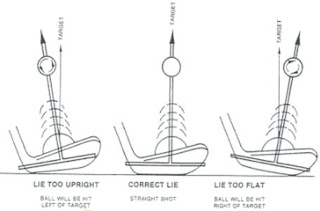 Most golfers play with wedges that are too upright. So for a normal shot and swing they get a ball flight that is often left of the target. If they don’t have the knowledge of club dynamics and how the dynamics change with the fit, they often compensate by turning the face open thinking the pull was caused by a closed face. Some will reroute the club on a bigger path to the right, which is the recipe for a shank, but that is another story for another day. Unfortunately, by opening the face, they also increase the amount of loft the club has at impact. The result is a straight shot high that flies shorter than expected due to the increase in loft. Unfortunately, by opening the face you also flatten the lie angle of the club. You can see this at home. Take your sand wedge and lay the club head flat on the ground with the leading edge of the face straight away from you. Now rotate the club head in a clockwise manner (opposite for lefties) and watch the face open. If you keep the club flat on the ground you will notice your hand drops lower and lower as you open the club. Why would this be a problem? Lie angles are usually tested by striking a ball off a board and then looking to see where the board marks the golf club. A wedge that is too upright, with an open face to compensate, will mark the sole of the club as if it is a perfect fit. So we keep playing at a disadvantage because we think we have the correct fit, blaming our lack of talent when it is really a club fit issue.
Posted by Bruce Rearick at 2:40 PM No comments:

A ball goes into the hole because two requirements have been achieved. First, the ball is traveling in the correct direction. Second, it is moving at the proper speed. The speed and direction the ball travels is determined in that fraction of a second the ball is on the face as the putter collides with the ball. At that brief moment all the other concepts used to describe the putting motion are of little importance unless they deal directly with the moment of impact. So to create our own strategy we must focus on those two factors, Direction and Distance and the parameters at impact that influence them.

A constant topic of discussion at the United States Golf Academy is from a strategic standpoint when putting, what is more important? Distance or Direction. A quick search on the internet will produce all the opinions you could ever want on the subject and all are valid points of view. However, for a player trying to develop a method or technique, it is very important you start with controlling direction.
There are a number of myths and legends about how the ball comes off the putter. These are mostly created by product marketing. Golfer's have a tendency to romanticize putting, when it simply is a collision of a moving object with a stationary one. Since the ball is on the face for such a limited time there isn’t much that happens. The ball moves from the impact depending on where the face of the putter was pointed and how fast it was moving. If the direction or speed changes after impact it is totally due to forces beyond the player’s control. So it is imperative that we control what we can.

When building a putting stroke we have to start with the issues dealing with direction. Controlling direction requires an understanding of the mechanics of the stroke. As you build your method, it is much more efficient to address the two issues in this order, direction first, and then speed. Why? Because how fast the putter is moving has no influence on direction the ball leaves the putter. However, how the face is delivered to the ball has a large influence on how fast the ball leaves the putter. Our putting study has shown clearly that with the putter moving at the same exact speed, how far the ball rolls will vary depending on other variables to impact. The primary factor is the vertical angle of the face at impact, or the loft. The loft is influenced by a number of factors, how much on the putter to start with, and have you done something to alter that number at impact. This can be done by changing the angle of the shaft at impact. Toward the target reduces loft, away from the target increases the loft. Another influence is where the face is pointed relative to the direction their putter is moving. As always the explanation is complicated, but for the player, we have learned if we can control these variables to control direction, the adjustments needed for speed are much easier to learn.

The moral to the story is this. If you are a winter practicer, work as hard as you can to understand what makes the ball start on line. Spend no time worrying about speed. Feel for speed is a constant adjustment because conditions change on a daily basis, but if we understand direction we are prepared to make the adjustments.
Posted by Bruce Rearick at 10:43 AM No comments:

In 2006 I saw PuttLab reports for Tiger Woods. A bunch of them.

His stroke was exactly on line at impact, the shaft was straight up and down and he struck the ball exactly at the bottom of the arc of his stroke. His goal was for a vertical shaft angle and 3.5 degrees of loft at impact. He was robotic in his ability to do that.

I have read twice in the past two weeks that he now hits up on the ball in excess of 4 degrees. This could be in an attempt to use the Method at 2 degrees loft, in order to get the ball rolling. Or it could be he drank the "Kool Aid" that says that hitting up on the ball when you putt, gives you "top spin" which means a better roll, so you will make more putts, and then you will win the lottery….. and all the other promises marketers make to sell putters. It is not a better or more efficient way and here is why I believe that.

The following is a PuttLab report of Iron Archie using a perfect arc. While it isn't an exact duplicate of Tiger's stroke it is very close and will help show the issues of trying to hit up on a putt. 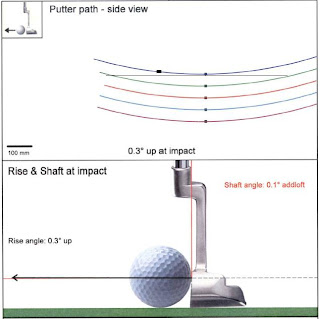 The diagram shows the side view of an arc. The black dots stacked over each other are the ball position. The single black square to the left would be the ball position required to hit up on the ball 4 degrees! The bottom picture shows the measurements of shaft lean and rise angle. So impact in this example was at the bottom of the arc and shaft position is vertical just as Tiger was looking for in 2006. 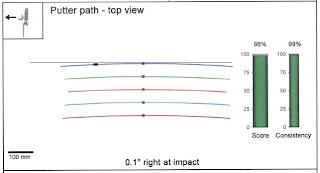 This picture shows the players view of the path that corresponds with the picture above. This is the classic arc many try to achieve. The black spot on the left notes the impact point required for 4 degrees (approximately) up, with no change in posture or setup. Remember you can't change the posture or setup without changing the stroke.

Puttlab shows that most of us hit up. In 2006 and the next couple of years later, Tiger was the best putter ever, certainly better than the pros used in the initial PuttLab studies that showed hitting up on the ball. Isn't it possible they should have copied what was working for him?

So based on a face slightly closed to the path, as anyone would have with the thought of releasing the putter, here is the where the direction of the path would have to be to strike the ball as the putter swings 4 degrees up. You have to tilt the arc to suit impact. 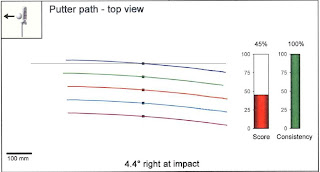 I know some players with paths this shape who are great putters. But they have used it forever and they understand the issues and requirements.