Warning - If you are looking for a simple solution to your putting problems the following is not for you.

When I worked with the people at Science and Motion, I had the opportunity to ask the inventor of PuttLab, Dr. Christian Marquardt what he considered the most important parameter PuttLab could measure. His answer was quick and clear, rhythm and timing. In our subsequent studies, we see the truth of his claim every day.

With our last post, we talked about the importance of maintaining a consistent time to impact when making a putting stroke, using stroke length within a consistent time, as the best way to judge the distance the ball would roll. However, the first post relates only to half the story. To lead into a discussion on the other aspect of timing importance lets start with a claim of my own.

The most important fundamental in the mechanics of putting pertaining to direction, is a consistent relationship of face to putter path. Notice I did not say staying square to the path, a popular marketing term, I said consistent relationship of face to path. Some of the most successful stroke mechanics are have faces open, or closed to the path. But, in all successful strokes the relationship remains consistent. It is the twisting of open to closed, or worse, closed to open along the path of the putterhead that causes directional misses.

All putting strokes rotate around a fixed point. If the putter is anchored the anchor point is the fixed point. With a conventional stroke, this point is typically at or below the base of the neck where the shoulder blades intersect the spine depending on arm motion and wrist flex. Since there is a fixed point and the putter swings around this point, all paths the putter follows are naturally circular in motion. If the plane of the stroke is up-right the putter will appear to swing on a straighter path. If the ball is positioned farther from the player creating a flatter motion plane then the putter will appear to arc. We believe it to be fundamental to success to stay on plane in your stroke.

So for any stroke there is a rotational requirement to maintain a consistent face to path relationship during the stroke. Some strokes are low rotation, some are intermediate, and some are high. However, all have some face rotation depending on the size of the arc and the stroke length. 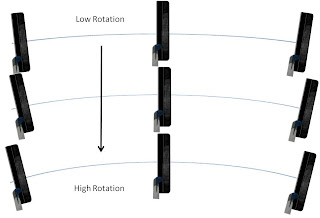 The next concept to understand is that the actual amount of rotation is relative to stroke length. So for example, a low rotations stroke might have 2 degrees of backswing rotation on a short stroke, 4 degrees on a medium length stroke, and 6 for a long stroke. A slight arc might be show 4, 6 and 8. A big arc can be as much as 6, 8 and 10 or more. It is important to realize that these are examples and not guidelines. What is important is what amount of rotation keeps the putter relationship to path consistent.

By keeping a consistent time to impact the putter relationship to path remains consistent. If you use the diagram above as an example, If each image represents the length of the backstroke, the time to reach the length of stroke is consistent. For example it may take about 2/3rds of a second to the end of each backswing. Upon return you might find that it takes about 1/3rd of a second to return to the ball for each length. The rate of rotation of the putter ties directly to the speed the putter moves. slow speeds = slower rate of rotation, faster speeds = faster rate of rotation. so as the putter changes speeds to meet the time requirements, the rate of rotation adjusts as well. Returning the putter back to the approriate position at impact. So if the length/speed relationship is inconsistent, the rotational speed is inconsistent as well, creating the twisting or instability we mentioned earlier. I know it is sounds complicated, but in application it is actually more simple. Consistent time over variable distance is easy to conquer. If you chose the length of the stroke our internal clocks maintain the time relationship. In golf terms, we view this as a natural tempo. This timing or tempo will only change by choice or circumstance (nerves), and when left alone will remain constant. It is this constant that can work to our advantage. in another post we will give you a variation on this method that involves one length backswing with a varible length follow through. More variables to conquer than the equal length back and through method, but with some knowledge can be a successful strategy as well.

At the end of the day the combination of consistent time over varied stroke length allows us to control both speed and direction. Our ultimate goal when putting.


Posted by Bruce Rearick at 2:05 PM No comments:

I have recently been involved in a discussion on whether dying the ball at the hole is better than taking a more aggressive line and speed to the hole. There is a tendency to attribute these tendencies to personality. There are risk takers (aggressive) and those who prefer to play safe (passive). I always use the comparison of Arnold Palmer and Jack Nicklaus when discussing opposites in golf. Mr. Palmer was aggressive, always taking a more direct line with greater speed to the hole. Mr. Nicklaus on the other hand had more of a “die it at the hole” style. Both were very successful. It is important to note that both players were very consistent in staying with their strategy. Either you are always conservative or always aggressive, but never change from one putt to another.


There is also a mechanical reason for which strategy you should chose. In an analysis of a 5-year study using Science and Motion PuttLab technology, we found that a players natural timing and rhythm had to match their perception of putting in order to be successful. We found that the average time to impact, from the start of the backswing to impact was around 1 second. It didn’t matter the length of the putt. Longer strokes moved faster and slower strokes moved slower, so that the time to impact remained consistent. As you might guess within the group there was just about an equal number whose timing was slower than one second, as there was with a time to impact faster than one second to impact.

As we used this information to help our players control the distance the ball rolled we found that those who struggled most we the one with slower tempos trying to take an aggressive line, or the “up tempo” players who tried to die the ball at the hole. The players who matched timing to perception had a much better feel for distance. As you try to analyze your own stroke, use the following guidelines.

1. Vary your stroke length to match the length of putt.

3. Analyze your findings based on your idea about the best way to putt. Slower tempo will better suit a correct speed approach, where the “up tempo” player has more success taking a more aggressive line and speed approach.

As you go through the process, you will find that the conflicts you might discover regarding timing and perception will go a long way in helping you make the appropriate changes in your putting strategy. A common occurrence for example is the player who slows down their stroke on longer putts (passive approach) and then get quick with their shorter strokes. A leave it short, then run it by, pattern is a common theme for three putt greens. Consistency is key. Find the right pattern, stay with it, putt better.

Posted by Bruce Rearick at 1:00 PM No comments: