I watched with interest yesterday after your conversation with Steve Stricker. I noticed you are still struggling with shutting the putter. It looked much better but I saw it on a couple of putts. One of which you made, which is a bit unfortunate because of the false sense of accomplishment. We both know shut doesn't work for you over the long term, so positive feedback on the shut stroke has to be considered a negative. You don't need me to tell you, you don't want to rely on luck.

I know from my work using PuttLab that an increase in putter MOI will have a direct influence on the rotation in the stroke. Higher MOI = less rotation. It seems like a great idea when you read it; less rotation has to be better, except in your case! You have been very consistent in your comments about getting the putter to swing. I know from seeing your PuttLab reports you putt best when you have MORE rotation than is required not less. I would suggest filling the groves with a heavier material, drilling some weight out of the heel, and going back to the weight of your PingMan grip. If we remove the influence of the putter, I think you will find it easier to work the toe away from the ball and get back where you wish to be.

Posted by Bruce Rearick at 10:43 AM No comments: Links to this post

The Illusions of Putting


I am currently reading an amazing book call Thinking, Fast and Slow, by Noble Prize winner Daniel Kahneman. The book deals with his work on judgment and decision-making. In his analysis of making judgments and decisions, he describes the two systems of the brain, “System 1 operates automatically and quickly, with little or no effort and no sense of involuntary control. System 2 allocates attention to the effortful mental activities that demand it, including complex computations. The operations of System 2 are often associated with the subjective experience of agency, choice and concentration.” In the golf world, we have come to refer to these as conscious and subconscious thought. What I have found fascinating is how the use of one system at the wrong time can create biases or errors in judgment or our decision-making ability. The following is an example of how this can happen.

Look at the preceding drawing. At first glance, which of the two horizontal lines is longer? If you used System 1 or your subconscious mind to make the judgment, you would have probably been in error. There is no difference between the lengths of the line on the top, which appears longer to almost all of us, compared to the line on the bottom. If you used System 2 to make the judgment you would have found a ruler, measured the two, and known immediately they were the same. Once you know this to be true you will never again be fooled by the question, even though you will still percieve one line longer than the other line.

He goes on to explain that not all illusions are visual, there are illusions of thought, which he calls cognitive illusions. In the golf world, a perfect example of a cognitive illusion would be the concept of putting stroke that is straight back and straight through, or the concept of a “better ball roll” or the idea of an “expanded sweet spot”. These are marketing terms created to influence a buying decision that in application can do more harm than good.

My most frequent criticism as a golf instructor is that I make things too complicated or give the player too much to think about. It is probably true to a point. However, I know from experience that I cannot rely on System 1 to make decisions about my putting without the knowledge provided by System 2. I will try to give you a couple examples.

We are standing on a green and we are making a judgment on how far the hole is from your ball. System 1, uses a glance at the hole and allows what we see to determine how long their stroke should be or how far we should try to roll the ball. We do this unaware that undulation, the tilt in the green, or the visual background can create an illusion much the same as the diagram. Uphill putts will usually appear closer than downhill. Ridges in the green will also make the target appear closer. Open space behind the green, will give a longer putt the appearance of the target being farther away. The solution to this problem is not use the visual System 1 as your guide. It is better to use a System 2 method of walking off the distance. Chose real, a measurement rather than perceived the visual.

True story. A student comes to me with a brand new putter, a change in posture, and a different technique. All because he saw on television, the assumed benefits if the ball “rolled better”. When asked how the ball, rolling better, would make him a better putter, there was no knowledge or analytical thought or reason, only “it just would”. After I explained that the ball only rolls when it reaches a certain speed, and could only roll in one way, end over end. In addition, since a ball struck with a putter never had enough rotation or spin to influence direction or speed, which are the two mechanical factors that make a putt, that he might have made a bad decision based on what I now know to be a cognitive illusion. He then mentioned that he used a line on the ball and that many times the ball rolled unevenly and he could see it because the line on the ball oscillated as the ball rolled. When I explained, the ball was still rolling end over end and what he saw was the result of when the orientation of the line differed with the center of the ball, rolling end over end. He had made a System 1, visual judgment, rather than taking System 2, analytical approach. In the end, the player had to ask himself, “Was it worth the poor performance that comes with starting over and are there any guarantees that the new would ever be as good as his original method?” Finally, what would be the result, using a System 2 approach to improve his original method?

If there is a moral to these examples, it is without knowledge of how to perform the task you cannot trust System 1 or subconscious to make your best effort. You can only go on autopilot if you have practiced and made the effort to learn. To use another common suggestion, you cannot trust what you do not know. To “trust” the swing or putting stroke requires some knowledge as to what you are trying to do. We were not born with a subconscious ability to swing a golf club. It is a learned skill that over time can become second nature, but not without the effort to learn how.

Posted by Bruce Rearick at 12:03 PM No comments: Links to this post

I know it has been awhile since you have heard from me. Sorry as I have been pretty busy and to tell you the truth I lost interest as you went through your phase of changing putter styles to the heel shafted model.

As you have started to play again using a model similar to the one you have always used, I have watched your stroke with interest. In particular, your comments on how some days you can get the putter to swing and on others you can't. The most recent of these comments came after your round at Pebble Beach on Sunday. The solution is pretty obvious if you will give me a minute to explain.

You always putted best when you soled your Cameron on the heel side of the tri-plane grind of the Newport sole. I have hundreds of pictures of you with the toe up a little at address. Much of the time using the Nike Method, the putter soles directly in the center of the putter. I would assume this has something to do with the way the sole is ground, without the definite flat spots to have the putter sit as the Cameron had. If, and I am assuming, that the specs of the Cameron and the specs of length, lie and loft of the Method are exactly the same, in order to do get the Method to set flat you have to play the ball closer. 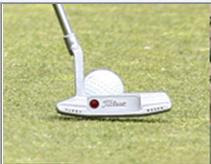 When you move the ball closer your first move off the ball is heel first and the putter shuts. It is obvious on TV. It is a mechanical reaction to the ball being closer to you without a change in posture. When the toe is up and the ball is farther away, the putter swings square to the path away from the ball. This gives you room to open the blade a little in the backswing, as you have always done, and then release the putter through the ball, allowing you to feel the release. When you shut the putter coming off the ball you have nowhere to go. If you get on your PuttLab and experiment with where you sole the putter you will see it clearly. Remember to check the rotation in the first two or three inches from the ball. My suggestion would be to find the placement where the putter doesn’t shut on the backswing mark it on the sole and send it back to David at Nike and have him grind the putter flat on that spot, so you set it down the same each time.

Welcome back, fun to be able to watch you play again and good luck to you in your future events,

Posted by Bruce Rearick at 2:25 PM No comments: Links to this post