In 2013 I did the following analysis for Nike employees at the Oven. At the time I was working regionally with the Nike rep, discussing putter fitting and design. The document is my response to a conversation showing why I felt the player in red would struggle with a full offset model, similar to the one used by the player in blue, and why.


In this first break down of the two strokes, there are two noticable differences. First is the position of the left shoulder at address. Notice Red’s is much higher at address. Second is how the two player’s release the putter. Player Red uses what I call a “hold” release, similar to what you might see when hitting a cut shot. Player Blue allows the toe to release much like you would when hitting a draw. Notice the extention of his right arm through the ball. This would be similar to a draw release in your full swing. 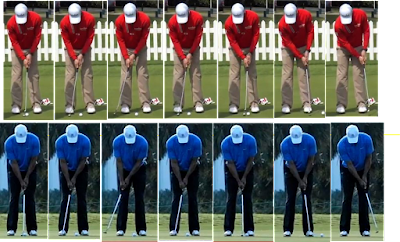 In the next pictures we predict the path shape based on posture and release. This is done by building a mechanical model of the player’s stroke based on set up, and source and sequence of motion. I developed this protocol in 2010 and it has been very accurate in predicting a player’s basic stroke. It serves as a model for the player, not necessarily to copy, but to compare to actual measurements of the stroke. I phrase it this way. If we built a robot just like you, how would the putter swing? Creation of this mechanical model allows me to work with player’s who do not have access to technology that can measure the parameters of their stroke and allows us to make educated changes rather than by preference of guess. 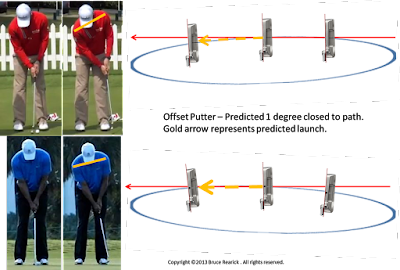 When it comes to fitting putters, over the course of accumulating 10 years’ worth of Puttlab data, it is clear that the more offset a putter has, the more likely it will be in a closed position relative to the path the putter swings. In other words, it is a safe bet that for a right handed player the more offset the more left the ball will launch. Remember this is relative to path and not target line!


In our observation of Player Red, it was apparent that he had a tendency to miss left. The compensation for the miss was to block right. He recently admitted as much in his explanation of why he changed his stroke. The following pictures are exaggerated in appearance. The actual difference is more subtle and would be difficult to portrait in this format.


The blue line is a depiction of the stroke path along a tilted plane. The red line shows the target line. So if the model matches reality, and the putter swung in a position along the path true to predictions, the following describes why he misses left. Face closed to a square to left path.
Player Blue alters his path to match his release and putter position relative to the path. So if both players have a face 1° closed to the path. Red is left at impact while Blue is square.


There are any number of solutions to Red’s problem. You could change the set up to a closed shoulder alignment to move the path to an inside to down the line pattern. This explains the left hand low set up from earlier in the year. However, this stroke, at times, has been very successful. So it seemed foolish to try a wholescale change.  You could put the grip on 2 degrees open to counter the closed tendency from the offset. While you might think that is silly, for year’s it has been a common fix for tour level players. One manufacturer has done it on purpose, because it suited so many of their staff players and allowed them to use the model that looked best to them and what would sell best for the company.


In this case, Red had a history of using a putter with limited offset. In fact, prior to the Method he used a no offset mallet. My suggestion was to eliminate the offset on his current model. According to our model, the putter would be positioned more open to the path than the original. This would allow him to modify his exaggerated release, help reduce the tendency of the left miss, yet still use the fundamentals he had used with some success in that past.

So why didn't he make the switch? I guess I will never know for sure. My best guess is that a traditional model design that was already in the product line would be easier to sell. In the Pro/Endorsement business as much as we want to think that player's use what is best for their games, it doesn't always work that way.
One thing I find interesting in the interview. He blamed his path and what he saw on Puttlab for his two way miss. He is making the same mistake that many do when confronted with the reality of the measurements. Instead of looking to what actually causes the problem, they focus on what is easiest to see. The math is pretty simple 83% face 17% path. Why fix the 17% when the 83% is the problem? Especially when the path is consistent?
Posted by Bruce Rearick at 3:01 PM No comments: