Zack Johnson put on a short game clinic this past weekend at Colonial. He putted beautifully. If you are looking for a putting stroke that shows you a full release of the putter, Zach is your man. If you watch his stroke, you see Zach uses his right arm and hand to swing the putter forward. At times the left arm stops moving, but because the right wrist is soft the right arm keeps moving and finishes the stroke.


This release of the putter is a natural reaction to his “hands back” set up. His left wrist is already in a cupped position at set up, making it easy for the right arm to take over in the stroke and allowing the left wrist to collapse to make room, without influencing the position of the face relative to the target or the path of the putter. Try this. Set up with your right hand only on the putter and hit a few putts. After awhile you will notice that you start to stroke the ball with less bend in your right wrist to improve the strike. The arm swings rather than the forearm pushing. Now without taking your right hand off the club match your left hand and arm to the right arm. This is Zach’s set up. 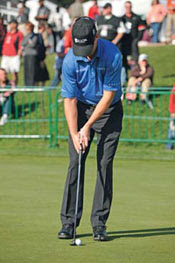 Where this soft left wrist becomes a problem is when a player is in a more “conventional’ flat wrist position. When the wrist goes from flat to cupped it flips the putter up, causing you to hit it on the bottom of the face and almost always with the face twisting closed in the process. With any player I work with that uses a right arm stroke, I suggest a soft left wrist.

What I love most about Zach’s stroke is that it is totally contrary to the method suggested by many “ball roll” specialists. Mr. Breed are you out there? I watched the tournament on and off for all four days and I never once heard the announcers talk about the “poor” roll Zach puts on the ball. Rather than hitting up on the ball he actually uses the loft of the putter and his right hand to lift the ball to start the putt and it rolls out from there. On fast greens or downhill putts this gives him the added advantage of using the loft of the putter to soften the hit and control the speed.

More than any other technique, this method mimics the feel of an underhand toss to the ball to the hole and is much easier to replicate than it looks.

Posted by Bruce Rearick at 3:17 PM 2 comments: Links to this post

Jason Dufner, of the PGA Tour, has been on a great run of late. Improved putting is usually the primary reason for success in golf, and it certainly is in Jason’s case. As I watch him, I see two things that have influenced his putting in a positive way.

Jason swings the putter with as little twisting of the putter face along the path of the stroke as anyone on tour. Please note I said path and not target line. Jason swings the putter on a simple and moderate arc. With his stroke if you stopped the putter at any point on the arc the relationship between the face of the putter and the path direction of the putter would be very close to the same. In golf marketing terms, he swings the putter square to the path. He is able to achieve this consistency in his stroke because he is one of the few players using the oversize grip as designed, to eliminate hand action in the stroke. There are a number of ways to move a putter. You can go old school and just use your hands or wrists, like an Arnold Palmer or Billy Casper. You can guide the stroke with a dominant hand and arm like Jack Nicklaus – right arm or Dave Stockton - left. You can swing both arms together with a minimal use of the shoulders like Loren Roberts or Stan Utley. Finally, you can swing the putter with the shoulders with passive arms and hands as a Jason Dufner or Aaron Baddeley.

The oversized grip is most effective when used with a shoulder driven stroke! The first three examples of strokes I mentioned all require some use of the hands to control the face of the putter. A grip design that eliminates the hands, used with a source of motion that requires the hands is a recipe for disaster. Jason swings the putter with his shoulders and no use of the hands so there are no conflicts.

I read in an interview that Jason tries to visualize how the ball will get to the hole and then tries to replicate what he envisions. This would differ with the method of trying to analyze the putt by verbalizing the movement of the ball along the distance of the putt. Left then uphill, then right then downhill, would be an example of verbalizing the read. Even though I am a great believer in verbalizing the mechanics of any stroke or swing, when it comes to applying the mechanics of putting, it is better to “feel” the read of a putt. While not an easy way, there is a definite advantage to developing that skill.

There is an element of guess-work involved with green reading no matter what you do. It makes it easier on your nervous system if you can give the brain a preview of the putt in your head. Imagining a ball rolling to the hole is the same thing as seeing someone putt the ball before you, like in a scramble, as far as your brain is concerned, but with an advantage. Visualization of the putt in motion gives you a sense the “feel” of the stroke required, while just watching gives you no sense of how the stroke will feel. No amount of measuring or pointing will give you a feel for the putt. You have to rehearse it in your head to establish the relationship of speed and direction. Short of hitting a putt twice, this is the best we have at our disposal. Jason does this as well as anyone and it shows.

Posted by Bruce Rearick at 9:51 AM No comments: Links to this post

Long term success in golf means having enough confidence in your method to not change everything when things get tough.


Posted by Bruce Rearick at 11:38 AM No comments: Links to this post

The search for a "best way" does not guarantee success. Consistency of effort, consistency of technique is what works best.
Posted by Bruce Rearick at 9:37 AM No comments: Links to this post

Set up to an aimed clubface! Don't aim the clubface from your setup! Maybe the most common mistake any player might make.
Posted by Bruce Rearick at 12:57 PM No comments: Links to this post

Putting. The difference between the greats and not so great, is consistency not proficiency.
Posted by Bruce Rearick at 8:29 AM No comments: Links to this post

Path determines direction. Face square to path. Hitting up rolls the ball better. All are false! Just harmful marketing terms.
Posted by Bruce Rearick at 11:40 AM No comments: Links to this post

Great putters are made and not born. Start here. http://www.bargolfinstruction.blogspot.com/2011/06/putting-fundamentals.html
Posted by Bruce Rearick at 7:40 AM No comments: Links to this post