Round Grip Solution for Face Control in Putting


There is a theory in the instruction world that the release of the golf club for every shot, including the putting stroke, should have the same feel.

In our research we have found there is some merit to this. Players with a right to left ball flight tend to release the toe of the putter faster than left to right players, who tend to hold the release. None of this is etched in stone or a hard and fast rule, but I can tell you we have had some real success by matching putter release to full swing release, when an established player is struggling.

One of the things we have seen historically is that players with strong left-hand grips in the full swing tend to struggle with putter rotation or lack of rotation in their putting stroke. So, for them this feel is impossible.

We are convinced this is because the standard putting grip with a flat reminder on the top, forces your left thumb in a different position than any full swing shot. With their thumbs on top of the shaft, in a weaker position, the strong grip player either fans the putter wide open in the backswing moving their forearm to a more natural position, or more dangerously, twist the putter dead shut to compensate. Forcing a block push release.

When asked to have their arms hand naturally from the shoulder socket we see that for many players who utilize a strong grip, their arms hang with their hands turned so the knuckles face out. Many instructors use this measurement of the natural extension of your arm. Like the picture below but with all variants of rotation possible. 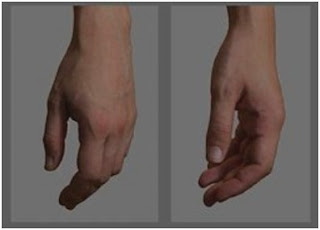 As we mentioned, because of the speed and fine motor nature of the task, the lead arm tries to return to its natural state in the forward swing. This natural extension of the arm does not match the position of the hand on the club, so face control to target becomes very difficult. Unfortunately, the softer the grip and the less you force control, the worse it gets. The opposite grip pressure of what common instruction would suggest is necessary to control the face creates tension and a loss of speed control.

The first solution we suggest is to remove the conventional grip and replace it with a round grip a little largest than you use with your full swing. We recommend larger as we are still going to grip this in the palms as you would when putting rather than in the fingers, as you might in the full swing.

You might be interested to know that Arnold Palmer won many tournaments using a round grip. He went to it often when his stroke felt out of sorts. In addition, when he did use a flat top as a reminder, he built his own using coat hanger wires place in a parallel position on the shaft and wrapping leather over that. The flat portion of the grip was never perpendicular to the face. If you are familiar with Mr. Palmer's swing, you know his grip was strong.

The trick to using a round grip with a putter is to follow this protocol.

1. Aim the putter first, before you perform any of your set up. Especially do not set your feet first. This can create a twisted feeling in your torso, when you go to aim the putter.

2. When you have the putter in the aimed position, put your hands on the putter in a manner that allows for the natural extension of your lead arm. Your lead arm is in control with this method. Trail hand is for power only.

3. After you place your hands on the club, move your shoulders to match the feeling required by your hands. Do not try to force them parallel to the target line!

4. This stroke requires a lead arm dominant movement pattern. You are going to swing the putter with your lead arm and support with the trail arm. This is very important as we do not want the trail arm to alter the left arm orientation.

5. Tip-Do not grip the club with much of a gap between your thumb and palm. A gap can create inconsistencies in how your hands move

For most players with strong grips matching the natural extension of the lead arm  usually moves the shoulders to a closed position. That is good. In the image below we will show you how this might look.

If the lead arms hangs in a closed position, and we follow the instructions as suggested. We should see a body alignment and predicted stroke path shown above. Red is shoulders, gold feet, green head and purple the predicted path. This is Profile 7 in our system. The most famous Profile 7 is Ben Crenshaw.

At this point we are ready to hit some putts. Before we try to make everything, we want to see if we have the set up dialed in. Use of swing/stroke thought of Left arm back and Left arm through.

Find a 10-12 foot putt. Hit the putt with your eyes closed. It works better if you have a partner, so they can pull the ball away before you see the results.

• If you hear the ball go in the hole regularly, you have it correct no change necessary.

• If it is difficult to finish the stroke, and you feel the right hand trying to help to finish, or you can’t seem to grip it strong enough to correct a right miss, see the next slide.

If you feel it is difficult to finish the stroke the common practice is to open the stance.

You must maintain the grip with natural extension you established in the original set up. No other options are available. What you end up with is a strong left hand grip, but you have moved the path to a "parallel to target" orientation by turning your body to the eft. In this case now a Profile 8.

If you find this is necessary to be able to swing the putter freely with your lead arm, repeat the previous test from the new body set. The difference in the grip should be subtle. When you find the correct lead hand position mark the position of the left thumb on the grip.


It is probable that your new hand position on a round grip, with the open stance is the most likely combination.

I will be the first to admit this goes against just about every aspect of putting instruction. But if you have had to resort to a unconventional grip to control the face, this might be the answer.

If you need some help, we have just opened up another round of online instruction. Send me an email or fill out the contact form if you are interested.

Posted by Bruce Rearick at 12:04 PM No comments: Links to this post

Posted by Bruce Rearick at 1:06 PM No comments: Links to this post