Balance and the Yips

As I continue to study the physical and mental reasons for shaky putting strokes, one of the findings that I found most beneficial to share is the correlation of balance to the smoothness of your stroke. Because it is such a simple motion, at a relatively slow speed, most think you can swing the putter from any position. I suppose you can, but there is a very clear relationship between set up, balance and a reactive stroke. I am convinced if you have to react or steer the putter to impact you are asking for difficulty.

The following drawings shows what we believe to be a balanced set up for putting on the left and a forced posture that becomes unbalanced on the right. Typically the player on the right gets out over the balls of their feet with their head and shoulders more over the ball. Probably in an attempt to get their eyes directly over the ball. If you follow this blog you have read plenty how we feel about that. We know from studies with force plates and pressure sensitive pads when the player on the right goes in motion there is often a subtle shift of balance toward the arches of their feet, often as the head comes up. So as the balance shifts the putter moves as well. Before you tell me not moving your head is a solution, ask yourself why your back hurts when you practice your putting. 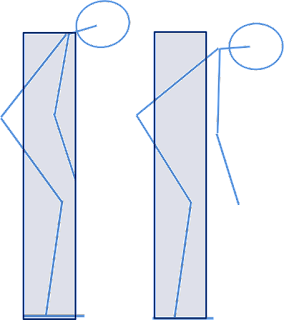 The following is an example of what can happen to the putter when this change in balance occurs during the stroke. The following is a screenshot from my BioMech Sensor. What you are seeing is the movement of a point on the shaft of putter and the relative position of the face relative to that movement. My goal for every student, with this technology, is to see a single line where the shaft stays on the same plane through the stroke. Again rotation and shaft plane direction, not the "arc" appearance of the movement of the putter head, we use in other measurements.The line can be a little left or right relative to the target, but if we see loops then we need to see if there is a balance issue. So after this Golf Technology 101 speech, what are we seeing in this picture? In this case we see the shaft changing planes in the back swing and a reaction to that in the follow through. 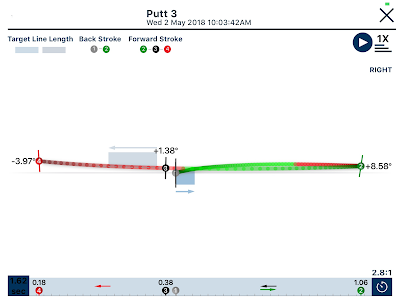 ﻿The back swing is represented by the curved green and red line. You can see the putter move away from the body as it leaves the ball on the back swing. In this case it is caused from a body lean toward the ball as the shoulders engage and rotate. You can see a second line just below the back swing line. This is the start of the forward swing. Notice that this line has moved closer to the player off transition. This happens as the body reacts to the weight forward position by shifting back to the heels to counter the initial movement. Finally, in the follow through,  you see the player shove the putter away from the body again in a reaction to the move under the original plane and get back to the ball located at point 3 black dot. This putt was shoved to the right.

I can imagine it is hard to believe that all this can happen in a simple putting stroke and I am sure there are many of you thinking I am making it too complicated. Maybe I am, but give this some thought. If you are a player making this stroke and continue to find a solution by trying to solve a balance issue with your hands, this movement pattern will only become more dynamic and the results are not likely to get better. Any stroke where the hands react to a balance issue are doomed to struggle.
Posted by Bruce Rearick at 11:21 AM 2 comments: Links to this post